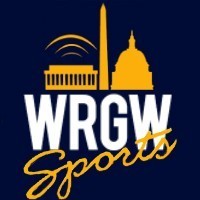 The weekend began Friday night with GW pulling off a three-set comeback to upset St. Louis in five sets in front of an energetic home crowd.

The Billikens won the first set, 25-16, reaching 0.353 to GW’s 0.147. The Buff and Blues stayed close at first but soon fell behind by six points, which they couldn’t overcome. During the set, GW’s Bella Bowman reached second place all-time in the program for career digs, totaling 31 digs in the match and 1,683 overall in her career.

GW dropped the second set 25-14, prompting fans to leave the Smith Center. The set quickly got out of reach for the Buff and Blues as they dropped five points to make it 6-1. Coach Katie Refeirt took a time out, but GW couldn’t put together a run to close the lead. St. Louis led in hitting (.378 to GW’s .000) and kills (14 to GW’s 7).

The third set changed the momentum of the match in favor of GW. The Buff and Les Bleus won 25-22 in a hard-fought set. GW took an early five-point lead, but after an effective timeout in St. Louis, the score was tied. The rest of the set was back and forth, with the teams trading leads. Towards the end of the set, the score remained tied at 22. GW took the last three points of the set to take it, as the fans erupted in cheers.

When asked what she said to the team after the second set to achieve such a turnaround, coach Katie Reifert replied, “You know, everyone asks me that and I don’t really said nothing. We were playing good volleyball, not great volleyball, but good volleyball in the first two sets. So I just kept them determined and told the attack to go. Once that started clicking, they realized they could play against that team.

The Buff and the Blues won the fourth set in a big way, winning 25-10. GW held the Billikens to 0.000 completion percentage during the set as they hit 0.467. St. Louis surrendered the first five points to GW, prompting them to take a timeout. Shortly after, GW ran off and extended their lead to 13 points, forcing the Billikens to take their final timeout. The lead proved difficult for St. Louis to overcome as GW tied the game and forced set five.

The Smith Center was electric for the final set of the match. GW wasted three points early but then scored four unanswered to make it 4-3. Neither team was willing to go down easily, as the teams traded points keeping the score tied or within a point. The Buff and Blues held a three-point lead at 10-7 when the Billikens called a timeout, which proved effective. After the timeout, St. Louis scored two points in a row and eventually tied the set at 12. GW took the final three points of the set to win the match, completing their second comeback in three straight sets.

On Saturday afternoon, GW picked up their fifth consecutive victory by defeating the Billikens in four sets.

The Billikens took an early lead in the third set and won 25-17. The set was marred by a few questionable calls from the referees, with fans expressing their displeasure. St. Louis led with .314 to GW’s .097 and had 16 kills in the set.

GW took the fourth set to end the match, completing their weekend sweep. The Buff and Blues started on a four-point streak, but St. Louis turned the lead in their favor to make it 8-5. Both teams traded leads throughout the set, keeping it close until the end. The Billikens made a service error, giving the Buff and the Blues their last point of the game.

Coach Reifert expressed her gratitude to Smith Center fans during weekend games, saying their energy is “everything.” She added: “I love playing at the Smith Center. I’ve played here. I think it’s a great volleyball atmosphere. We know we have to put on a show. We have to win. We don’t expect not for fans to show up if we don’t give them something to watch.

GW are now tied for second in the A10 conference and will look to continue their winning streak next weekend against Fordham.

As aviation goes electric, how do we ensure safety and speed up regulation?